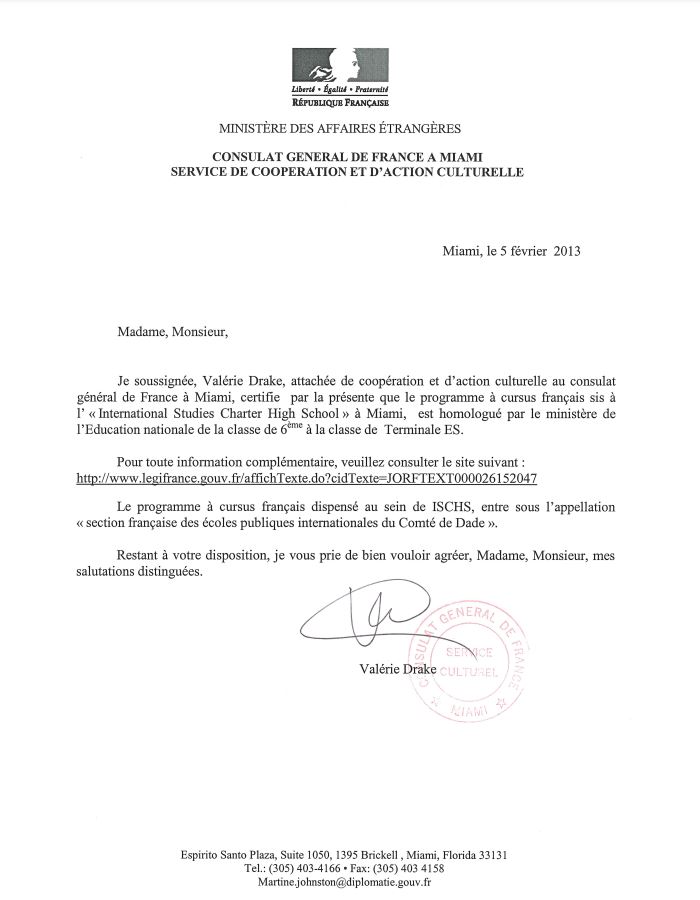 The  French International Studies Program as recognized by the French government.

The French IS Program in Miami

The French International Studies program is unique in offering a program in French and American bilingual education in selected Miami-Dade County public schools.

The French IS program consists of the French National Education curriculum in core subjects in addition to the American curriculum as defined by the Florida Department of Education.

Because of the American component, the overall curriculum is very different in nature from the one taught in a traditional French School. This curriculum is financed by public money from Miami Dade Public schools system and also by money raised by FIPA. That’s why your support to FIPA is key for ensuring the continuity of the program.

It has been existing for 25 years and is taught in 4 public schools in Miami Dade.

In 2003, an agreement was signed between the education authorities of Miami-Dade County and the French state. Their collaboration was formalized by creating a dual curriculum international studies program which received approval by the French Ministry of Education. This certification allows students who plan to return to France to follow the French curriculum and pursue their education in France without suffering any interruption.

What is a Magnet School?

A Magnet School is a public school that offers programs specializing in a particular discipline (foreign language, fine arts / drama / music, technology, science, etc.). The term “Magnet” refers to the fact that these schools have been designed to attract students from throughout the county and do not depend on a principle of boundaries. It is therefore required to undergo a process of admission. Like any public school, schools must teach the curriculum approved by the State and be accountable to the Florida Department of Education.

What is a Charter School?

A charter school is a public school that is managed by a private corporation. Therefore charter schools are not subject to some of the rules, regulations, and statutes that apply to other public schools in exchange for some type of accountability for producing certain results, which are set forth in each school’s charter.

ESOL is an acronym for English for Speakers of Other Language.

Upon their arrival in the US system, ESOL students are assessed to measure their level of English. These tests are developed by Miami-Dade County and are different from other English tests they may have taken (TOEFL, Cambridge …). The results range from 1 (lowest score) to 5 (highest score).

Every year, students retake a test and are expected to raise their score until they are not considered “ESOL”.  A beginner student typically stays in the ESOL program for three years.

At the middle school level, being ESOL means that the student will take a special English class as an elective in order to progress more quickly in English. In addition, ESOL students are graded more leniently in the subjects taught in English. ESOL program is applicable in the 4 schools listed above.